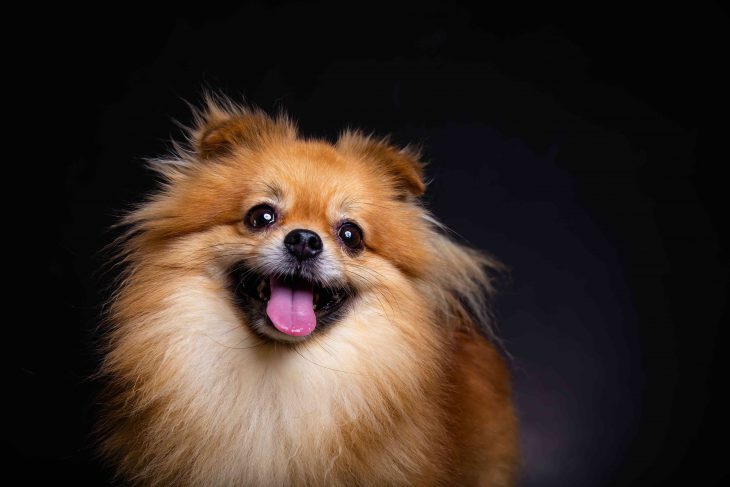 Pomeranians originated from Central Europe - On the southern shore of the Baltic Sea lies Pomerania. The name was derived from the word “Pomorze” which means “along the sea.” Pomerania is abundant with lakes, forests, and farms. The population of the region experienced a major shift after the First World War, and the Second World War. The dog earned its name after the breed was developed in some areas of Germany and Poland.

They belong to the Spitz family of dogs - It’s a little hard to believe that Poms are in the same family as large sled dogs! Pomeranians are the smallest dog breed from the Spitz family. They’re in the same group as breeds like Alaskan Malamute, Samoyed, and Norwegian Elkhound. Breeding them down was the reason why they remained lap dog size today.

Pomeranians Were Originally bred from Large Working Dogs - As this is such a small breed of dog, it may surprise you to learn that they actually originate from large working dogs from the Arctic regions called the Wolfspitz. This name was later shortened to Spitz, which is a German word that means sharp point. This term was first used in the 16th century by Count Eberhard Zu Sayn when he was referring to the sharp muzzle and nose of these dogs.

It is now considered that the Pomeranian is a descendant of these dogs due to its sharp facial features. However, as it is much smaller, it is likely that many other breeds contributed to the Pomeranian. In fact, there has been effort focused on gradually reducing the size of the Pomeranian over the years.

They are incredibly friendly even with other species - Though each dog has a different personality, it’s a little different for the Poms. Pomeranians are always excited. They are friendly, enthusiastic, and eager to meet other people. Whether it be humans or other animals, Pomeranians love meeting friends! Like almost every other animal companion, dogs also mimic their humans.

Poms are picky eaters - This dog breed is particularly cunning. Pomeranians have a few quirks when it comes to eating. Poms can be a bit picky when it comes to food. Some hardly touch their food, some try to hide it, some prefer treats, some just want chicken, and some prefer handfeeding. According to the website PetPom.com, there are some ‘traps’ Pomeranians do to their owners to make sure they are fed what they wanted. But when Poms do like their food, they eat a lot.

They Share Their Name with Several Other Species - The Pomeranian breed of dog is not the only species of animal known by this name as the name is used for many other species that are believed to have originated from the Pomeranian region of Europe. The Pomeranian Coarse wool Sheep is from this region and has a history dating back over 3,000 years.

The Pomeranian duck, also known as the Pemmern duck, originates from the German Baltic Sea coast and shares the same ancestors as the Swedish Blue Duck and the Shetland Duck. The Pomeranian goose is a breed of domestic goose that was developed by German farmers and is popular in Germany, Poland, and other Slavic countries in the Baltic region.

Their Coats Need a Lot of Care - One of the most recognizable features of a Pomeranian is their coat. They have a thick, textured, double coat that comes in more colour variants than any other breed of dog. The most common colours are orange, black, cream, and white. However, other colour variations include spotted, black and tan, brown and tan, brindle, brown, red, blue, sable, merle, and many combinations of these colours. Other notable features of their coats include a fringe of feathery hair on their hindquarters and a highly plumed tail. Owners of this breed must take care of their coat and it is recommended that they are brushed daily. This is because of the coat’s thickness and the constant shedding. However, their coat is not difficult to groom and will take only minutes each day. Grooming is important to prevent matting as this can lead to discomfort and health problems, such as irritation of the underlying skin. Regular grooming will also maintain the quality of the coat and improve the appearance of a Pomeranian. It is also recommended that Pomeranians have their coats trimmed every one to two months.

Queen Victoria fell in love with a Spitz dog when she went to Italy in 1888. The Volpino Italiano or Florentine Spitz, according to a Victorian-era description, had a “long, thick coat that seems to stand out from the body, a tail which curls tightly and lies close to the back, a foxy head, small, erect ears, rather short legs, short back, and a generally square and thick-set appearance.”

The Queen had over 30 Pomeranians, two of which were the red-coated Marco and the white-furred Gena. She said the dogs reminded her of Queen Charlotte’s, her grandmother’s, dogs. These dogs comforted her in the decades she spent mourning over Prince Albert.

Alopecia X is a Common Condition Amongst Pomeranians - Compared to many other breeds of dog, there are very few health conditions to which the Pomeranian is prone. However, there are still some health problems of which Pomeranian owners should be aware. One of the health problems associated with this breed is a condition called Alopecia X. It is also known as ‘black skin disease’. This is a genetic disorder that leads to their skin turning black.

The second symptom associated with this health condition is the loss of hair. While some dogs with Alopecia X will only lose some of their hair, it can result in total hair loss. This condition is often known by alternative names, such as coat funk, woolly coat, severe hair loss syndrome, and pseudo-Cushing’s disease. There are sometimes other reasons why a Pomeranian suffers from hair loss, such as hormonal disorders.